The round robin is finally over. Nine games over six days for six wins, two draws and a loss means that we finished third in our side of the draw. A quarterfinal appointment with Colombia is locked in.

It has been fun thus far. We have had some tough games and a couple of easier assignments. One of the most enjoyable parts of coming away to a competition like the World Championships is testing yourself against the different styles played by other countries.

The general standard of hockey is quite high back in Australia but our geographical isolation mean international competitions are few and far between. We play a trans Tasman series against New Zealand every other year. They are fiercely contested affairs but coming up against the same faces year after year does wear a little thin.

Each time I come away to World Championships I am amazed at how much time the puck spends on the wall. The other countries seem to love that shit. I’ve never been averse to a bit of biffo on the wall but keeping it there for the entire game saps the interest out of the contest. It stifles imagination and creativity and turns the game into a bargefest.

The other obvious difference is the amount of time the puck spends on the back of player’s sticks. Some of the guys from other countries have mad skills: they use smaller sticks and attempt all these amazingly complicated and elaborate moves. They use the reverse flick far more often.

That type of play is very effective but I only know the Australian way. I try to get tight to the bottom and hit the puck hard. I’ve got a push-pull, a swerve, a flick and a curl.  Most of my teammates have a similar toolkit. What I like about our style of play is that there’s no bullshit. It’s basic and it’s effective.

Finals start tomorrow and there is no better way to test our style of play against the best in the world.

The Australian Elite teams arrived in Eger nearly a week ago. The first New Zealand contingent arrived a day or two after. Many of the other teams didn’t turn up until yesterday. It’s interesting that two of the nations who have to travel the furthest, arrived the earliest.

Getting here early has had its advantages. We have had a chance to acclimatize and get over our jetlag. Some of the boys have even begun to decode the Hungarian passion for pork-based cuisine.

The team was selected back in January then we have spent the last seven days training, practicing and talking. This extra time adds to the excitement but also presents some challenges. You have so much time to think. Anticipation builds and builds so that by the time the competition actually comes around you are a bundle of nervous energy. The trick is not letting those nerves affect your game.

It’s a trick that I’m yet to master but our first game was a solid hit out against New Zealand. We drew the game 3-3 but the result is almost secondary to finally getting the games underway.

Eight months worth of swimming and training is behind us now. We will be better for our first run. Now we can get down to business. Let the games begin.

This conversation, and its many variations, is replayed over and over across the world. Every underwater hockey player approaches this situation differently.

My response has changed over the years. Early on, I would talk up the sport to anybody and everybody. Naive enthusiasm like that can only last so long. Cynicism and fatigue eventually crept in and I either ignored the question or directed people to look it up on YouTube. That kind of response doesn’t really promote the sport so I’ve been searching for a happy medium.

After a recent conversation I finally think I’ve found it. My reply went something along the lines of, “Get a bunch of weirdos together and throw them into a pool.” I wasn’t being derogatory. I’ve always considered myself a first class weirdo and the marginal nature of our sport has some big upsides. Underwater hockey isn’t really that much different to other recreational activities. It is no weirder than a bunch of blokes chasing a bit of leather around a field or people picking heavy stuff up then putting it back down. Less people play underwater hockey that’s all. One of the things I like about our sport is that it draws people from different backgrounds. I have traveled the world playing underwater hockey and have met all kinds of new and strange people. I wouldn’t have had these are experiences if I didn’t play underwater hockey.

The good times are set to continue over the next couple of weeks. The international weirdo convention that is the 2013 Underwater Hockey World Championships is about to kick off. Hundreds of like-minded people from around the world will converge on the little Hungarian town of Eger to scuffle about on the bottom of a pool.  I’ll be there. I’ll be going around with the Australian boys having a whole heap of fun in the process. It will be a chance to meet a whole new bunch of weirdos – people who found their way to underwater hockey just like I did. I’ll be writing some frivolous notes about my adventures.

A little comic about Underwater Hockey I knocked up: 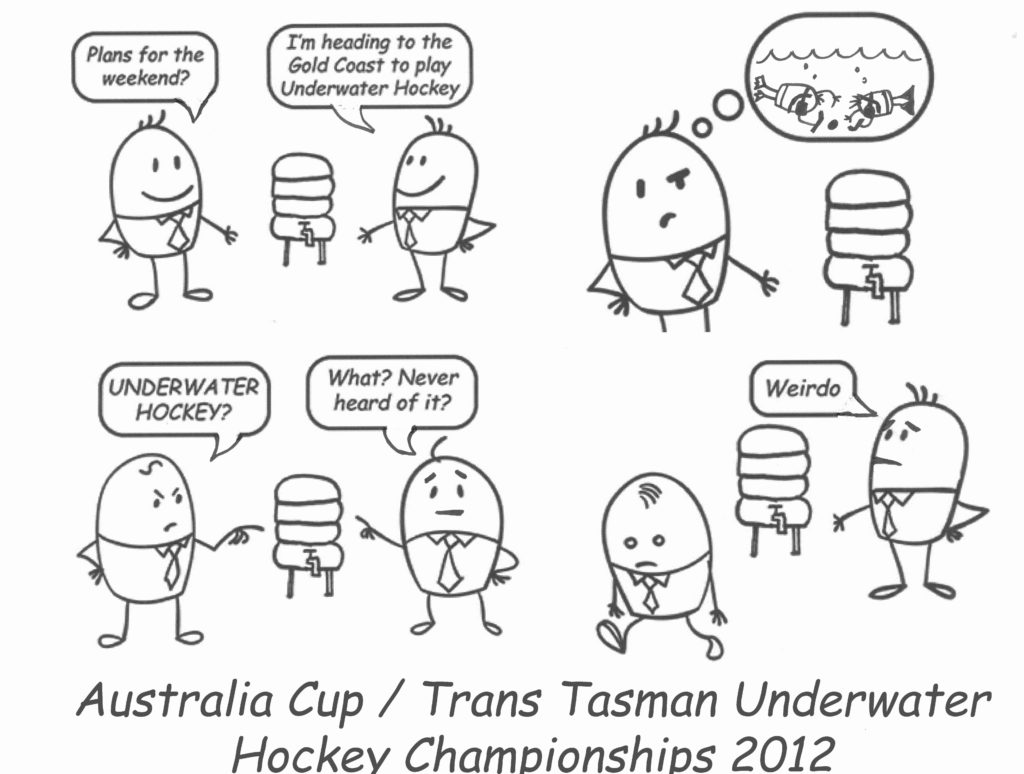 Athletes are motivated by all kinds of things but from my perspective, sport, particularly at the elite level, is the pursuit of satisfaction. Athletes compete to test their expectations of self. Pain, sacrifice and disappointment are often central to the journey but satisfaction comes from pushing your physical and mental boundaries and testing yourself against the best in the world. A privileged few emerge from that test having unequivocally met the expectations they set for themselves. Those rare moments when the stars align and you find yourself at the pinnacle of your chosen pursuit provide a fleeting but deeply fulfilling glimpse of soul savouring satisfaction. END_OF_DOCUMENT_TOKEN_TO_BE_REPLACED

It had been a while since our last slap about on the bottom of a pool so we were both pretty chuffed to be able to sneak a trip across to Singapore for the Asian Underwater Hockey Championships.

We were both looking forward to a couple of cheeky games and our hosts certainly didn’t disappoint. Singapore is well and truly a melting pot of Asian cultures, so it provided an ideal place to host an Asian Championships. This diversity definitely showed in the water with each country bringing their unique style and game: the Japanese with their power forwards and kamikaze runs; the Philippines their pressure, physicality and long flicking; Singapore had exuberant forwards, solid backs and the Doctor; the (West) Australians, a clean open game and far too much class.

Then there was us, the internationals a team of miscreants and misfits. Two from Australia, three from Hong Kong (via the UK) and five from Japan. We bridged cultural divides, overcame language barriers and showed great improvement and brief glimpses of competitiveness.

At 1.8m deep and with a recently retiled bottom, the Queenstown Swimming Complex proved an ideal venue for great competitive hockey across the two competitions (Nations Cup and Challenge Cup) and various divisions (Men and Women’s and Mixed). The games between Singapore and the Philippines provided particularly spirited contests.

Being an outdoor pool provided an added the bonus, we were treated to some spectacular sunsets and lighting displays. Apparently the Singapore poolies are dynamite on getting the punters out of the water at the first hint of lighting but thankfully the gods saw fit to keep it well off in the distance.

Our nights were spent enjoying a quintessential Singapore food court dinning. I have never really rated the food court experience, too many bogans and bainmaries, but visiting Singapore provided a glimpse of what they could and should be; aisles of deviously delicious, simple and cheap food. The problem is it will just make me hate all subsequent food courts even more.

The finals provided an aptly mixed bag of results:

Exhibition matches featuring a random hodgepodge of nationalities in both the Men’s and Women’s also provided a highlight.

With the formalities out of the way the scene was set of the real action to begin. The venue was Harry’s Bar, the location Central Quay. It was a presentation night that didn’t disappoint. The food was good and booze flowed.

The strip paper rock scissors proved to be nights true highlight. Two blokes stood on the table top, the crowd chanted, they danced, they paper, rocked or scissored, then the loser stripped. Young McKenzie showed some mettle to dominate his bout.

Arm wrestling was another pastime embraced in earnest on the night. More shots and booze followed as did acrobatics, chanting and dancing. Gavan the Wise was worshiped as the water gladiator that he is. The further the night progressed the further the adults regressed into adolescence. By the end it we were back to Blue Light Disco debauchery, and that means good fun was had by all.

Despite my obvious physical disabilities as well as my genetic disposition toward alcohol I have managed to achieve something worthwhile in my life, as I am now a World Champion. Some have questioned the validity of Underwater Hockey’s claim to be a legitimate sport; to them I can only respond with the words of one far wiser than I, “What the fuck would you know? You pig-ignorant wanker.”

The Australian Open Underwater Hockey team defeated New Zealand 5-4 in the final of the world championships held in Calgary, Canada. The masses rejoiced.

Canada was as I expected. The drive from Calgary to Vancouver consisted of pine trees, mountains and lakes. The experience was accentuated by listening to the lyrical brilliance of the Canadian icons of song – Celine Dion, Bryan Adams and Alanis Morrisette – whose songs receive constant airplay. In most countries this would be considered a form of mild mind torture. Not Canadia.

Braved the icy waters of Lake Louise near Banff. Came to, locked in a basement at a house party in Jasper – made my escape guided by the pale light of the moon via a skylight then wandered back to the hotel where, lacking a key, I had to scale three storeys to break in the balcony door. Discovered the joys of bacon and maple syrup on flapjacks. Only saw one Mountie, which in retrospect is quite distressing.

One thing that I will say about Canadia is that they have enormous trucks and trailers (they make Australia’s 4WDs and caravans look like pathetically pimped minis) as well as a huge amount of big-breasted women. There must be some abnormality in the Canadian gene pool or an environmental condition that is favourable to the development of abnormally large breasts amongst the women. Some businesses have even attempted to encourage this trend. One of the bars that we went to in Calgary paid half the cost of any breast surgery undertaken by their employees. A glance around at the punters quickly confirmed this to be a sensible business strategy.